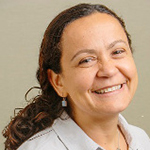 Dilek Hakkani-Tür is a research scientist at Google Research, Deep Dialogue Group, and a technical lead in conversation modeling. Prior to joining Google, she was a principal researcher at Microsoft Research (2010-2016), International Computer Science Institute (ICSI, 2006-2010) and AT&T Labs-Research (2001-2005). She received her BSc degree from Middle East Technical Univ, in 1994, and MSc and PhD degrees from Bilkent Univ., Department of Computer Engineering, in 1996 and 2000, respectively.
Her research interests include conversational AI, natural language and speech processing, spoken dialogue systems, and machine learning for language processing. She has over 60 patents that were granted and co-authored more than 200 papers. She is the recipient of three best paper awards for her work on active learning for dialogue systems, from IEEE Signal Processing Society, ISCA and EURASIP. She was an associate editor of IEEE Transactions on Audio, Speech and Language Processing (2005-2008), member of the IEEE Speech and Language Technical Committee (2009-2014), area editor for speech and language processing for Elsevier’s Digital Signal Processing Journal and IEEE Signal Processing Letters (2011-2013), and currently serves on ISCA Advisory Council (2015-2019). She is a fellow of IEEE and ISCA.