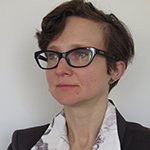 Dr. Svetlana Stoyanchev is a Principle Inventive Scientist in Speech and Language group at Interactions LLC., recently acquired from AT&T Labs-Research where she was a Principal Research Scientist (2013-2014). She obtained her Ph.D. in Computer Science from Stony Brook University in the area of dialogue. Her research interests include spoken and multimodal dialogue, error recovery in human-computer communication, information presentation, question generation, and semantics. Her recent work focuses on combining knowledge-driven and statistical approaches to modeling human-computer dialogue. Previously she held a position of a Research Associate at Columbia University (2011-2013) and a Research Fellow position at the Open University, UK (2009-2011) where she worked on automatic expository dialogue generation from text.